Natural Factors to Consider Before Digging for Gold 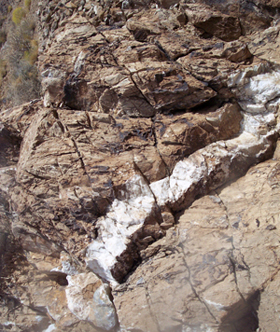 Some say that "gold is where you find it" and while that may be true, once you arrive at a known gold-bearing location, how do you decide where to dig first? Successful prospectors follow different methods, so there is no single "right" way, but no matter if you are sluicing, dry washing, or metal detecting, if you first consider the "lay of the land" you can better pinpoint a place to start:  Types of Placer Deposits. Alluvial, residual, beach, and other types of placer gold are all worked differently. Alluvial gold forms in streams. The gold tends to concentrate on bedrock as it moves downstream and makes its way down through the gravel to bedrock. Residual placers form on the surface as rock materials weather and are washed or blown away and do not concentrate on bedrock. Knowing the type of placer makes a big difference as to where you should begin to look for it.  Quartz Veins. Gold often forms with quartz, so quartz veining can be a very positive sign. Quartz is very resistant to weathering, so it may hang around on the surface long after any nuggets have sunk below the soil. If you find a visible quartz vein outcrop, that can be a good sign. The outcrop, as well as any areas downhill from it, should be sampled. Also remember that not all vein quartz is white. Some can be stained red-brown from iron.  Iron Staining. Not all gold-bearing mineral deposits contain quartz. Gold-bearing veins can consist of calcite or mostly sulfides which often weather into iron-stained spots as the pyrites convert to iron oxides. While quartz is often a good indicator, it is not necessary for the formation of gold nuggets— but sulfur is necessary. In places where gold occurs with quartz, there is often a lot of iron, which was once (before it was oxidized) a sulfide such as pyrite. Any gold that was formed in these deposits is left in the red soils that remain, or perhaps nearby. The red soils can be deep orange or red-brown or brick red.  Favorable Rocks. The type of rock considered "favorable" will vary greatly based on the area. The same "favorable" rock in California may not be the same "favorable" rock for finding gold in Alaska. In some places the best rock to look for might be schist or slate, in other places it might be volcanic. In general, sedimentary rock is usually not a favorable host rock for gold.  Deciding where to dig first comes from knowledge. You get that knowledge fromreading books and magazines dedicated to prospecting and metal detecting, talking with experienced old-timers, and GETTING OUT IN THE FIELD. Evaluate the area, think about the geology, and then make a plan before you dig. It will save you time and make your experience way more productive and fun! Next month's article we'll cover a few man-made factors to consider before you dig.
Article courtesy of www.goldrushtradingpost.com

San Francisco and the 1849 Gold Rush

The California Gold Rush was an important part of American history and in the shaping of the country itself. The discovery of gold in Northern California fueled a massive movement westward and to the city of San Francisco in particular. The motto of the State of California, “Eureka”, was inspired by the gold rush. It was also a major contributor behind the fulfilling of what many believed to be America’s manifest destiny. The large and diverse population of California today is a testament to the large number of people who came in search of gold from all over the country and the world.

Before the discovery of gold, the population of California was largely Native American. While there were roughly 12,000 settlers in the area, there were as many as 150,000 Native Americans who called California home. The settlers at the time were primarily of Mexican or Spanish descent. In 1839 there was very little land that was owned by people who were not Mexican in origin; however, Swiss immigrant John Sutter was able to obtain a grant for 50,000 acres of land in what is now the Sacramento Valley. On his land he built a Sutter fort, and in January 1848 he began the process of building a sawmill on the American River. It was during the building of this sawmill that a man in his employ by the name of James Marshall made a discovery that would change California forever. James Marshall had discovered gold, and despite Sutter’s desire and efforts to remain silent on the matter, news spread quickly. Roughly three months later, a San Francisco newspaper announced the presence of gold and by August, a major newspaper on the east coast reported on the discovery. In December, the President of the United States himself confirmed that there was indeed gold in California.

The excitement and desire for wealth sent massive waves of primarily young men to California. Sutter’s fort became overrun with squatters and San Francisco underwent a population boom that raised it from less than a thousand people to over twenty-five thousand in the span of two years. This influx of people from around the world occurred in 1949 and they are known as the forty-niners or Argonauts. The forty-niners traveled by any means available to reach their destination, regardless of the danger. While some traveled by land, others traveled by sea. Many people abandoned their jobs, families, and homes to go in search of gold. Forty-niners came from not only the east coast, but also from Australia, New Zealand, Latin America, China, and France. Regardless of how they reached California, the journey was often dangerous. Upon arriving in California life didn’t become easier for the forty-niners who lived in mining camps that consisted of rows upon rows of tents. These camps would become mining towns and were very dangerous. Miners were faced with violence from other miners, exhaustion, frustration over long hours and little results, food that was poor quality, and disease. Death and illness were not uncommon in mining towns.

For many Native Americans and Spanish-speaking Californians known as Californios, the gold rush proved to be a negative and even fatal turn of events. Native Americans were regularly forced from their lands, or died of diseases carried to California by miners and immigrants. They were forced from their lands and frequently massacred or hunted down if they resisted. Relocation often meant starvation and more death. As California’s Caucasian and immigrant population rose, the native population declined from 150,000 before the gold rush to less than 58,000 by the time it ended. Californios legal rights to lands were ignored and their property seized. On public lands there were no formal laws or legal rules regulating who had a claim on a specific area. Often the miners would stake a claim that was theirs for as long as they worked it. Once the claim was no longer actively being worked, other miners were free to work and stake their own claim on the abandoned site. This was known as a claim-jump. Because of the lack of laws, disputes over claims were often handled in a violent manner.

Although the Gold Rush came to an end by 1855 it had many short and long-term effects on California. The short-term or immediate effects of the Gold Rush included, as previously noted, the near genocide of the Native Americans whose numbers dropped as low as 30,000 by 1870. The result of mining practices caused damage to the environment as well. Fish were killed by chemicals and silt that came from the mines and leached into the water. Land was destroyed by quartz and hydraulic mining. Much of this damage to the environment may also be considered a long-term effect as it can still be seen today. The destruction of land led to the destruction of animals and plant life. Other immediate effects were the growth of major cities such as San Francisco, and an economic boom in those areas as well. California was entered into the Union as a result of the Gold Rush, which also encouraged new means of transportation. By 1852 the population of the state itself reached 250,000 people. The long-term effects of the Gold Rush can be found in the way in which California is seen by the rest of the country and the world. The term “The California Dream” is associated with the Gold Rush and the desire of thousands to have a new beginning. The term the “Golden State” is also tied into the Gold Rush. Other references to this particular time in history can be found on the California State seal, which depicts images of the Gold Rush. The term ‘gold rush’ is still used today to depict a large number of people pursuing a single new industry that promises great economic opportunity.

The State of California was largely shaped by the Gold Rush of 1849. Its very admission to the Union and its population growth was all a result of the discovery at Sutter’s Mill. The quest for gold in California brought many positive and negative consequences. These included not only explosive population growth, economic opportunity and great wealth for a lucky few, but also environmental exploitation, xenophobia, and death for many miners. In the end, the rush for gold in 1849 changed not only San Francisco and California, but also the face of the entire nation.

This article was referred to us by Christina's Youth Gold Mining Club in Denver, Colorado

Where To Find Us:

Want to Become a Member?

Are you interested in becoming a member but still have some questions? For more information, use our contact form

I will have on site all necessary permits and licenses.

I will not prospect in areas closed to prospecting and mining.

I will respect other prospectors' claims and not work claims without owners' permission.

I will fill in my prospecting holes.

I will appreciate and protect our heritage of natural resources, wildlife, fisheries, and

private property and respect all laws or ordinances governing prospecting and mining.

I will be thoughtful, considerate, and courteous to those around me at all times.

I will only build fires in designated or safe places and in accordane with current federal,

effect on the environment.

equipment to drip onto or into the water.

I will remove and properly dispose of trash and debris that I find.

I will not remove stream bank material, destroy natural vegetation or woody debris          dams,  nor discharge excess silt into the waterways.